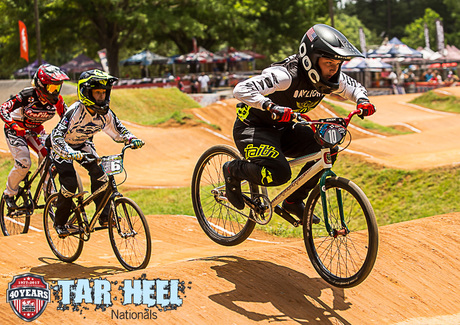 Justin “JP19” Posey, hometown favorite, continued his dominance at the Carolina 2017 USA BMX Tarheel National Race. Posey took first place, but not before Chapel Hill’s own and rookie, Cameron Moore made it a race. Moore trailed Posey but in the end, JP19 showed his ability and experience to win the race out of the 7 riders in the Pro Open group by sweeping all three mains.

While JP highlighted and capped off the event, stealing some of that thunder was 8 year old, Kate Clarridge. Riding for “Gate Nine Designs,” Claridige outmuscled the boys in mixed groups and dominated the girls action with two victories of her own.

In other action, Lil’ Avalance and Mayson Hayes both impressed and wowed their respective opens with triples.

While Arizonian, Joshua White ruled his class of 9-10 year old Open and the 10 Expert open by finishing on top.

The 10 Novice event proved to be one of the more exciting races during the Tarheel races, as Huntersville’s own, Aiden Bray, determined his way to the finish line in first place. South Carolina’s, Brady Hunt had a good showing, finishing second.

Finally, at the 15 X main, a highly contested battle between Spencer Cole and Cameron Bramer, was marred with many hit decks, yet Bramer was able to will himself along to take top honors.
The weather cooperated for the most part, the atmosphere was friendly, and the event was jam packed with great action as many young riders showed their true talents and spirits. Posey, Lil’ Avalance, Hayes, Bray, Bramer, and more continued to impress as it was a succesful event at this year’s 2017 USA BMX Tarheel Nationals.